With notoriety like that, it’s no wonder that people make it a goal to hike through this trail as a badge of honor—and that the question becomes just how much ground does walking that path cover, aside from mileage. What states does the Appalachian Trail go through? With a total of fourteen, those regions are:

What’s interesting for those who enjoy history is that this trail happens to go through all but three of the original thirteen colonies before the foundation of the United States. To hike this trail essentially means that you’re going from the top of the country to the near bottom, or vice versa.

While the official Appalachian Trail rests between Springer Mountain in Georgia and Maine’s Mount Katahdin, there is an unofficial international route that continues to follow the mountains up into Canada, ending Labrador and Newfoundland. However, for those aiming to become a thru-hiker that’s followed the entire trail, heading into Canada is optional.

HOW MUCH TIME DOES IT TAKE TO HIKE THAT MUCH GROUND? 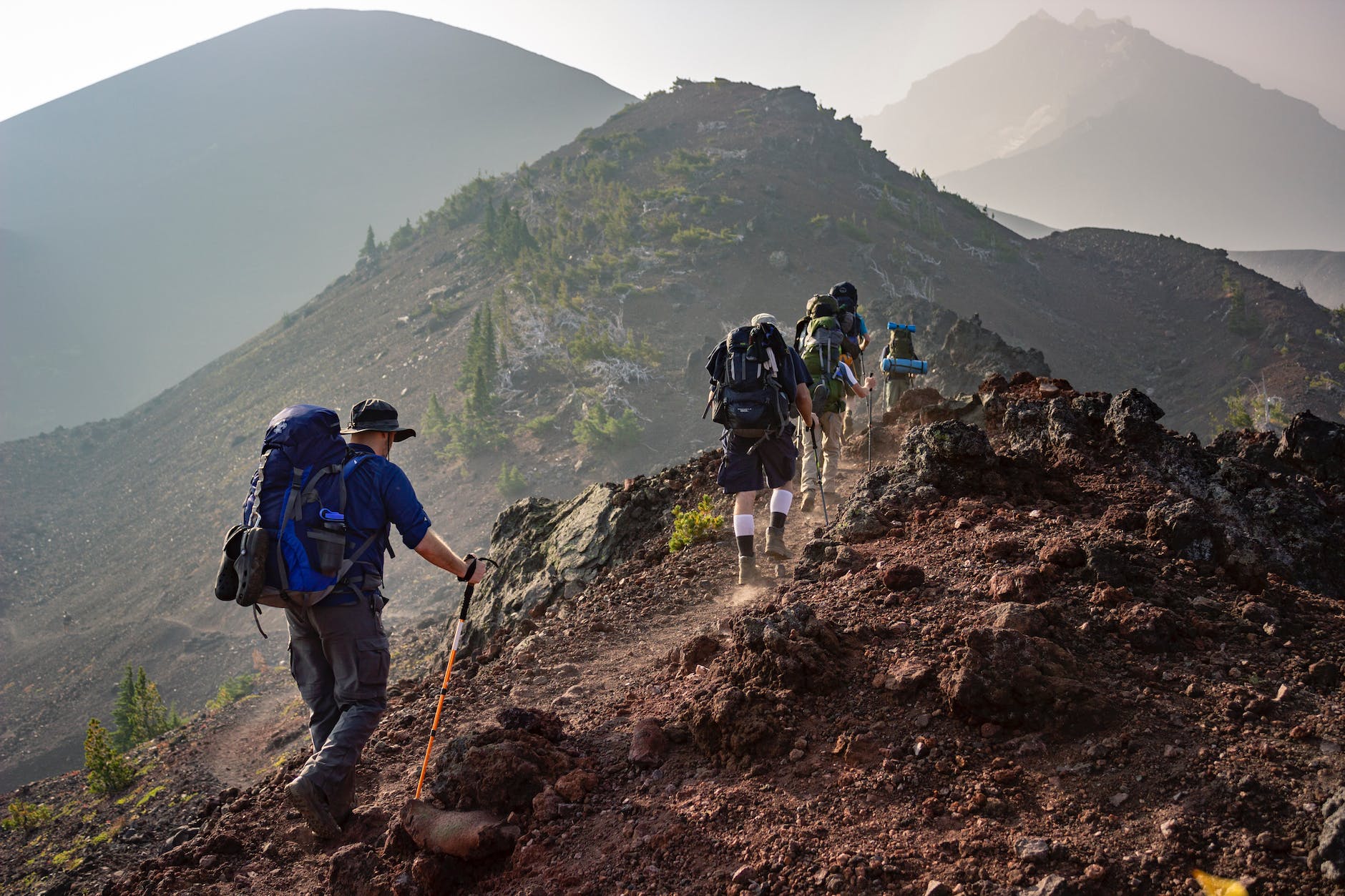 With so much ground to cover, it’s become an almost coveted honor to attempt to hike the entire Appalachian Trail in one go. Those who do so (or at least attempt) are known as thru-hikers. Making it entirely through the trip can take five to seven months, depending on the pace that hikers take. Usually, the recommended speed is that hikers cover an average of eight miles per day.

Though eight miles can seem like a drop in the bucket in comparison to over two-thousand, that’s still a substantial amount of ground to cover—especially when you do it day in and day out. It’s possible, yes, but attempting a complete thru-hike is undoubtedly a challenge, and not many hikers make it all the way through in one go.

However, a newer trend has come up in regards to hiking the Appalachian Trail, where hikers will take on one section of the path at a time, covering all the ground over multiple journeys. This option is an excellent fit for those who don’t have several months to commit to traveling across what states does the Appalachian Trail cover.

WHAT’S THE BEST WAY TO HIKE THE APPALACHIAN TRAIL? 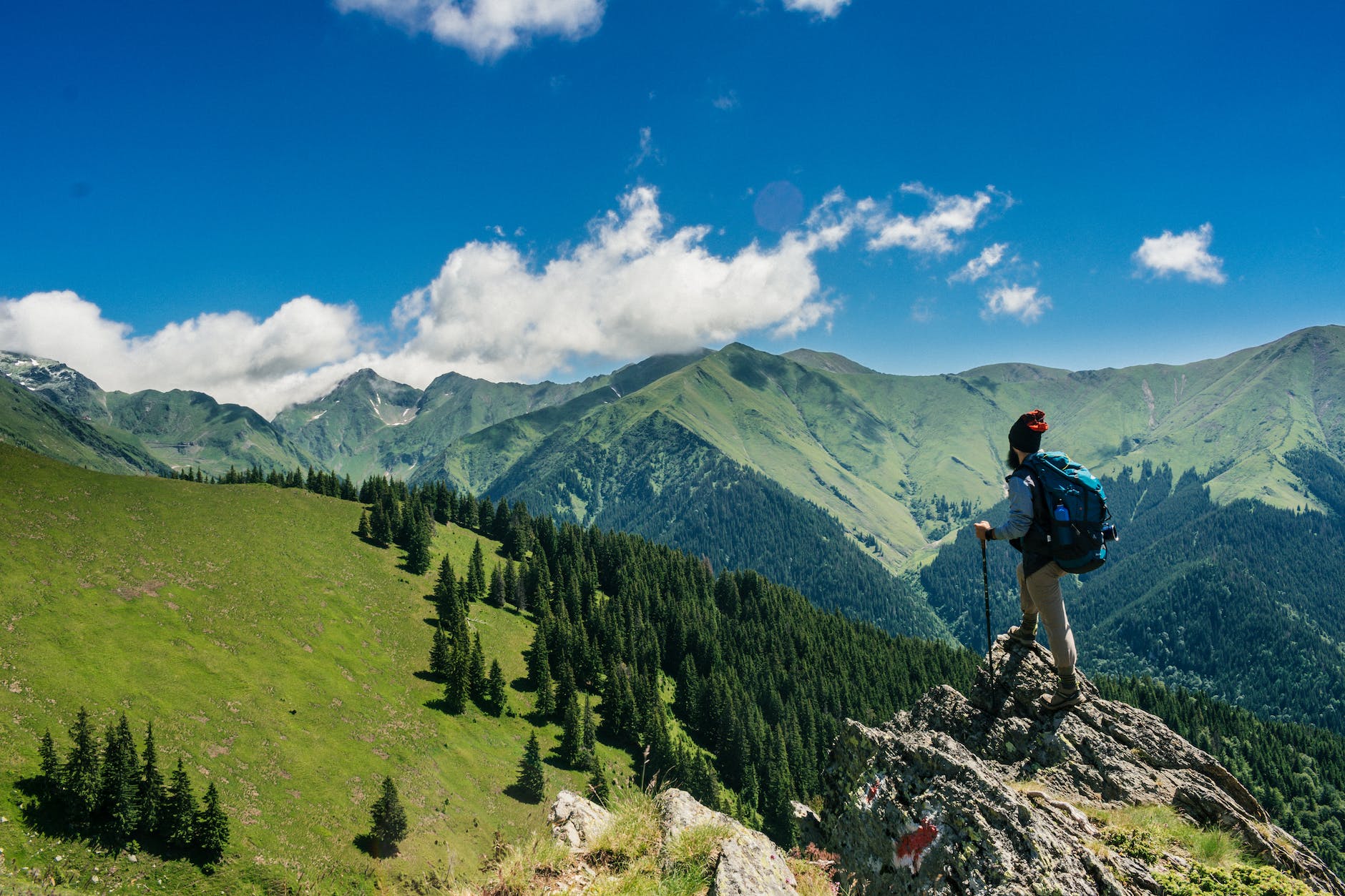 For anyone that wants to attempt a thru-hike, the best approach is to start in Georgia and head north. This approach is best because starting from Mount Katahdin and heading south is a much more strenuous hike, especially since you’ll likely need to start in cold weather. Snow makes severe conditions, plus there are few supply points in the early legs, increasing the weight of your load.

That’s not to say that hiking northbound doesn’t have its drawbacks. For one, you’ll need to stay close to your schedule so that you can make it to Mount Katahdin before it closes in early October. Additionally, the trails are more crowded for northbound hikers, as it’s the more popular route, which can make it challenging to take advantage of available lodging and trail space.

Despite all that, starting in Georgia is the generally preferred way to go, even for experienced long-distance hikers who can handle the rough conditions of starting in Maine. It’s also possible to take a “flip-flop” hike, where you start at one point, then travel to the other end and hike it. Taking this path can help you avoid crowds during busy times of the year.

It’s best to assess your hiking skills correctly and if you feel up to the task of taking the more challenging southbound route or if you’re better off building yourself up to the challenging paths of the north. With options like section hiking and flip-flopping available, you can figure out a plan that will allow you to enjoy the Appalachian Trail best.

HOW WILL I KNOW WHAT PATHS ARE PART OF THE APPALACHIAN TRAIL? 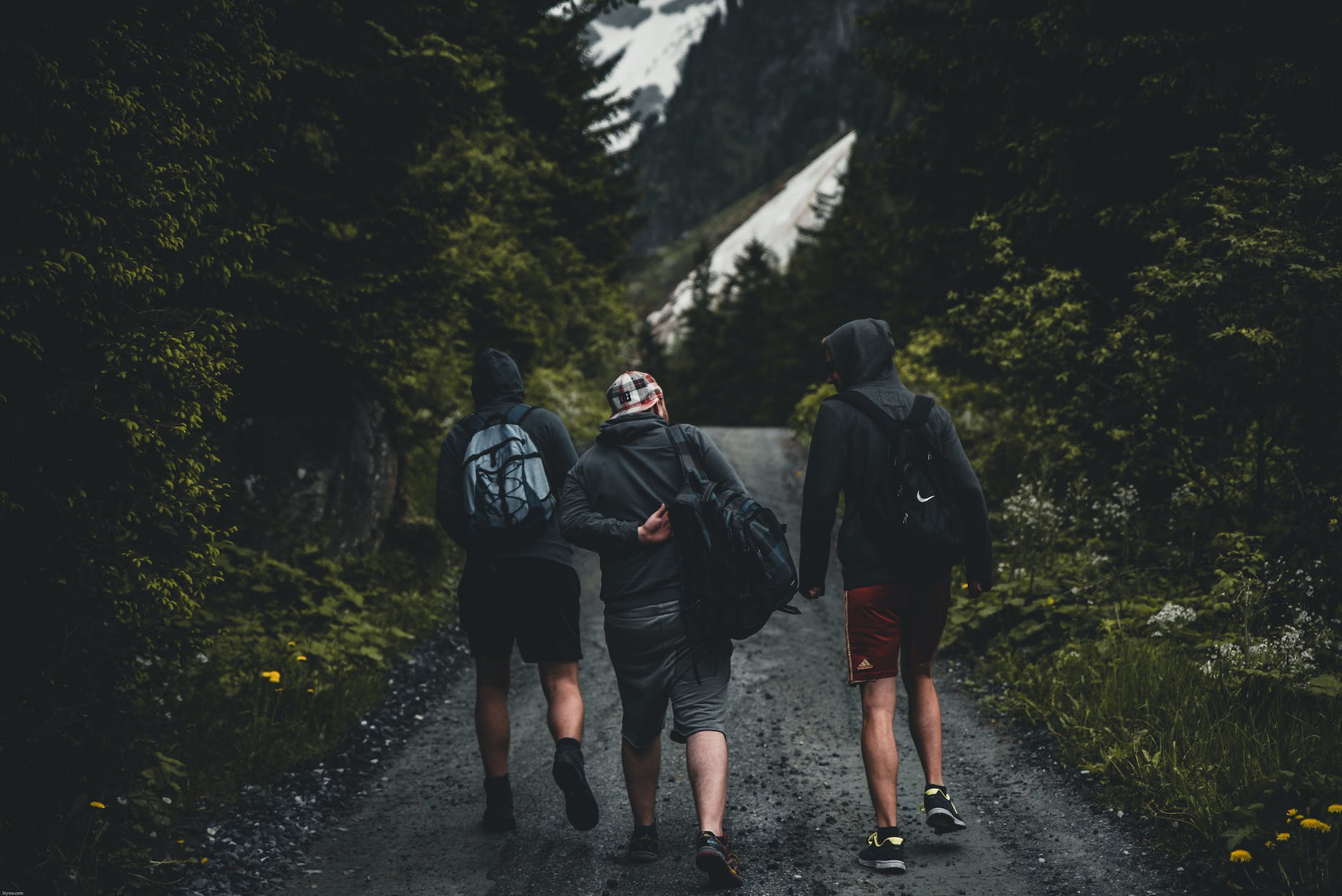 If you only go hiking in short bursts, you may not have a hard time remembering the path to the top of a hill and back down to where you started. With long-distance hiking, however, becoming lost is a genuine possibility that you may encounter. With a path as long as the Appalachian Trail, keeping track of where you are is vital.

Thankfully, though it’s a challenge, the Appalachian Trail has organizations that handle its maintenance. Among other things, that duty happens to include maintaining the trail markers. These signs have a distinct white AT marked on them; so long as you follow these signs, you’re going in the right direction.

Even so, you should never take a long-distance hiking trip without some map to help you keep your bearings. Since you won’t regularly be around outlets, you can’t rely on your phone much, either. While there are plenty of maps of the area available, the official Appalachian Trial guidebook indicates the most up to date versions of the paths, as well as other helpful information for your trip.

WHERE CAN YOU STAY ON THE APPALACHIAN TRAIL? 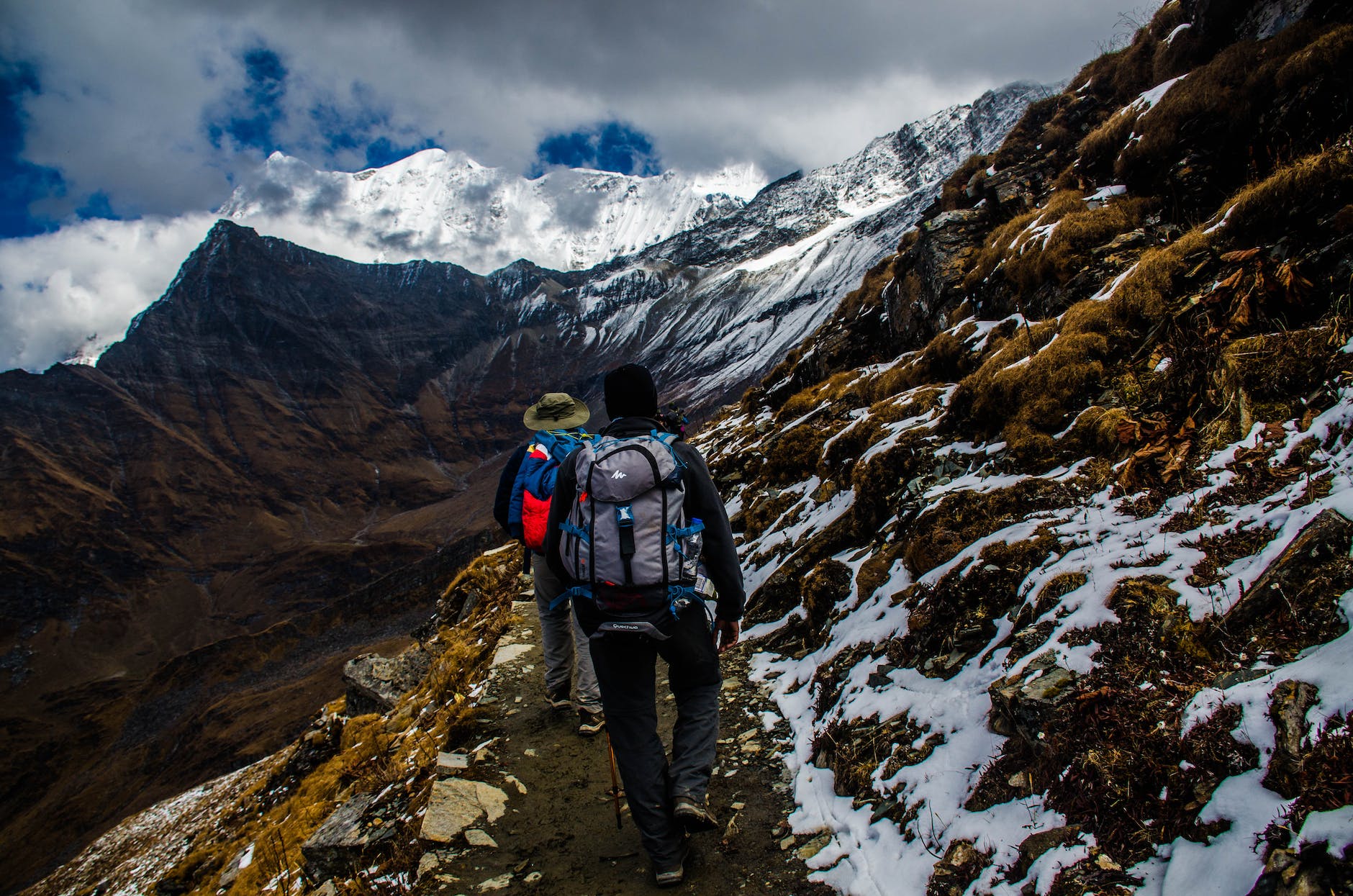 Aside from its impressive length attracting hikers, the Appalachian Trail has also become such a popular destination thanks to its incredible views. Between forests, national parks, and even sections of the trail that go through farmland, there’s always something incredible to see, and often while you’re far from civilization.

However, just because you’ll be away from modern amenities like cities, that doesn’t mean you’ll be without security. The Appalachian Trail has about two-hundred-and-sixty shelters along its pathway—usually about eight and a half miles apart. It’s these structures that have influenced the amount of ground that a hiker will cover in one day.

Shelters are generally excellent checkpoints, as they tend to be near sources of water and by firepits. Even so, sometimes you’ll find accommodations closer together or farther apart. On the places of the trail where there are nearby towns with lodging, you may not find shelter, simply because there are other nearby places that are safe to stay. It’s essential to plan your hiking for the day accordingly so you can rest safely.

These shelters aren’t full homes, but the log structures with walls, a floor, and a roof make for better accommodations than sleeping in a tent, especially when it’s raining (which you’re likely to encounter). While the shelters are free to use, they also operate on a first come, first served basis, so it’s no guarantee that you’ll get one, especially during busier hiking seasons.

That possibility means that it’s generally better to pack a tent in your gear, just in case. Areas near shelters will usually have campgrounds, so there will be space to stay. Additionally, the accommodations can be almost a full half-mile off the trail in some cases, so it can be somewhat inconvenient to use them. If you want to save on gear space, prepping for hammock camping is another option.

How Does Hiking on the Appalachian Trail Look?

With all these considerations you need to have, an average day on the Appalachian Trail will involve setting your course for the day, confirming your location, and setting out to hike until you reach your planned checkpoint. In the busier seasons, you may encounter other hikers that you can travel alongside. For the most part, you’ll be in nature, save for when you cross paths with a town.

You’ll naturally need to pack up your belongings and camp at the start of the day, and eating becomes a different experience while hiking, as people tend to need at least two-thousand calories more than their regular diet to have the stamina to last in the harsh hiking environment.

Some days, you’ll need to take time to get a hiking permit. For most of the Appalachian Trail, you don’t need to do anything special to use the available paths. However, there are multiple points where you’ll need to obtain a permit to cross into a specific area, such as some parks. These aren’t expensive permits, but you’ll want to have them before you head into the set territory.

Whenever you cross into towns and cities, you’ll want to stock up on food and other supplies that you need for a safe and comfortable journey, as well as check in with anyone at home to let them know you’re still safe. Many hikers, the farther that they go on, will increase the number of miles that they walk in one day to keep better pacing.